Special envoy of the President of Uzbekistan and head of the Department of State Language Development in the Cabinet of the Republic of Uzbekistan and their accompanying delegation came to Afghanistan two days ago for expansion of the bilateral ties as well as reconstruction of Amir Ali Shir Nawayee Tomb in Herat, Bakhtar New Agency added.

The Uzbek envoy during a visit to Bagh-e-Babur that was accompanied by the acting Minister of Information and Culture and the representatives of the Ministry of Foreign Affairs said that the main purpose of his visit to Afghanistan was to expand the cultural ties between Uzbekistan and Afghanistan.

He said that had visited the Tomb of Amir Ali Shir Nawayee in Herat and would cooperate with the Ministry of Information and Culture in repairing the Tomb and decorating the garden around it, the agency added. 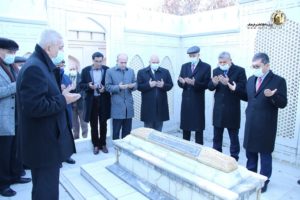 He, as quoted by the agency, added that next year will mark the 580th anniversary of the birth of Amir Ali Shir Nawayee, which will be celebrated in Uzbekistan.

Emphasizing the expansion of cultural ties between the two countries, he said that the Republic of Uzbekistan supports the Afghan peace process and the establishment of peace and stability in Afghanistan.

Meanwhile, the acting Minister of Information and Culture Mohammad Tahir Zuhair said that Uzbekistan has a special place within the Afghan government and people and expressed hope that cooperation between the two countries will expand in all areas, especially in the field of culture, according to the agency.

The acting minister noted that the ministry is interested in Uzbekistan cooperation with the Ministry of Information and Culture in the restoration of monuments and cultural heritage of the country, particularly the works of the Islamic period.