Kabul (BNA) President Mohammad Ashraf Ghani met with a number of religious scholars during his visit to Kandahar province on Thursday afternoon, a statement from the presidential palace said.

Head of the Ulema of Kandahar thanked President Ghani for his continual support and said that, people of Afghanistan are Muslims and they have made many sacrifices for upholding Islamic teachings.

First Vice President Amrullah Saleh said, “The purpose of our visit to Kandahar is to meet the security and defense forces of Kandahar and hear from them on ensuring the security.” He added, “Defending the system and homeland is our shared duty.”

First VP Saleh articulated that IDPs would be provided immediate assistance through National Meal Program and the emergency code. He said, “Taliban proudly saying that they have reached to an understanding with the United States. Ulema should ask Taliban for what reason and logic they kill their compatriots.”

Referring to the bravery and courage of the Afghan Security and Defense forces, First VP Saleh mentioned, “These forces carry out 96% of the military operation on their own. We have protected this land for centuries and will protect it.” “We want peace because there is honor in peace and we invite Taliban to carry out negotiations inside Afghanistan,” he said. 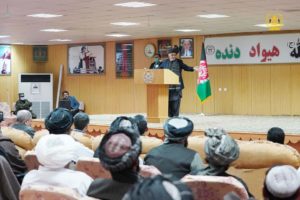 Referring to Taliban, VP Saleh said, “Why are you afraid of you people? The reason is you have hand in the bloodshed. Taliban are in consultation with foreigners all the time and if they come home, their series of consultations with foreigners will be cut off, then.” He added that, Taliban should abide by the will of the people and the elders of Kandahar should lay the foundation of Afghanistan’s identity.

President Ghani said, “Respect for the Ulema is a legacy we have inherited from Ahmad Shah Baba and Mirwais Nika.” He said, “Shah Waliullah Dehlavi was a great scholar of his time and had close relationship with Ahmad Sha Baba and we are highly inspired by his behavior.”

President Ghani said, “Peace does not come by killing and insulting, however, by accepting each other. He said, “let’s negotiate at Khirka Mubarak; Mirwais Nika or at Ahmad Shah Baba’s shrine. Kandahar is wide and we want you to commence negotiation.”

President Ghani stressed that, “We have one condition. We want people to decide to elect their leader by vote. This position is not worth of bloodshed. This is our country, and we will preserve it. Peace requires moral courage. Afghan people made the decision and we released Taliban’s prisoners. They have to stop bloodshed so that we commence negotiation.” 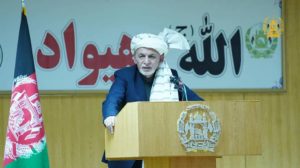 President Ghani referring to Taliban said, “Why are you afraid to stop bloodshed? If you think you have a place in the hearts of people, come to elections. There is dignity in peace for every Afghan and which is why we want a dignified peace.”

He said, “Kandahar is the heart of Afghanistan and this heart will be preserved. The love of Kandahar is in the blood of every Afghan, because it not only has the tomb of Ahmad Sha Baba and Mirwais Nika, but also their heritage.”

At the end, President Ghani said, “We are doing everything possible for the security and well-fare of Kandahar. We want the people of Kandahar to be united and have good local governance so that everyone can see themselves in it.” Kandahar will once again regain its dignity and be the pride of all.”

FM Atmar Meets with the President of the Islamic Development Bank